Talk About Art: The Craft of Artisan Clothing

Before big box retailers and the omnipresence of factory-manufactured clothing, people made clothes by hand. Two local artisans have taken up the mantle of slow fashion, and are creating garments and hats one piece at a time. They’ll talk about their studio work and show their wares.

Keira Duvernoy, a newly retired physician, has practiced millinery for the last decade under the moniker Mon Chapeau. She has studied traditional millinery techniques with hatters from California to Ireland. In addition to a line of more fashion-forward toppers, Duvernoy creates upcycled cold weather hats – a natural outgrowth of her full-time residency in Benzie County. She exhibits her work throughout Michigan and in the Berkshires. 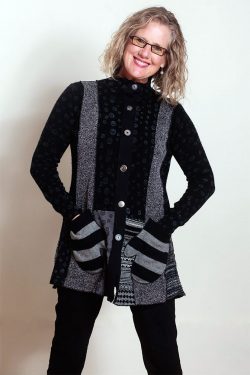 Meg Staley is a colorist, printmaker, textile artist, and clothing designer living in Maple City. After a mini-career as a Nordstrom buyer, she moved to New York City and started a company representing small, bohemian fashion designers, Soho Showroom. Soon after, she started making one-of-a-kind clothing with her husband, Jerry Gretzinger. Their collaboration, Staley/Gretzinger, spanned 25 years, was featured in Vogue, Harper’s Bazaar and Elle magazines, and sold to Bloomingdales, Bergdorf Goodman and many other stores and galleries across the country. Staley’s current practice focuses on garments that employ dying, printing, applique, and patchwork techniques.

This studio-clothing edition of Talk About Art is offered without charge, and in conjunction with “Fiber Without Borders,” a juried exhibition, that runs September 13 – November 7 at the GAAC.  For more information call 231/334-6112.